The 10 Best Hospitals in the World

Of all the industries on the threshold of transformation, none is more politically contentious, tightly regulated, scientifically significant or economically important than health care. Hospitals around the globe will drive—and be shaped by—much of this disruption.

Newsweek has spent the better part of nine decades covering every aspect of health care, and we are committed to helping our readers make sense of the changes sweeping this industry. As part of that commitment, we partnered with Statista Inc., a global market research and consumer data company, to develop a groundbreaking ranking of the world’s best hospitals.

The hospitals on this list are at the forefront of adapting to these new challenges while providing top-notch patient care. They range from the Mayo Clinic in Rochester, Minnesota, with its peerless educational arm; to Singapore General Hospital, which pursues clinical research and offers outstanding nursing; to the Charité hospital in Berlin, which employs more than half of Germany’s Nobel Prize winners in physiology or medicine.

How far would you go to get the best care for yourself or your family? This guide helps Newsweek readers discover the leading hospitals—close to home and around the world—that are shaping the future of medicine. 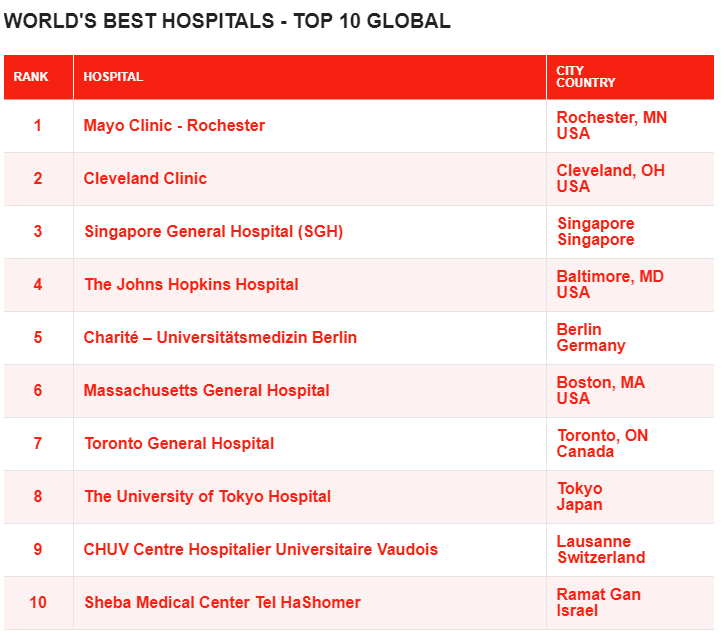 The hospitals on our list are all world leaders in health care, but these are the very best—the top 10, according to Newsweek and Statista’s panel of doctors, medical professionals and administrators across four continents. A list of the top 1,000 hospitals worldwide is available online.

The Rochester, Minnesota–based Mayo Clinic has provided patients with comprehensive medical care for over 150 years. Now with centers in Arizona, Florida and Minnesota, as well as over 19 hospitals in five states, its health system serves more than 1.3 million people annually. But it’s the nonprofit’s peerless educational arm, including the Mayo Clinic Alix School of Medicine and 57 research centers, that sets it apart, providing vital innovation for the entire medical community (more than 7,200 peer-reviewed publications to date). That, along with superb patient support, earns the Mayo Clinic Newsweek’s top spot for 2018–19. ► MayoClinic.org

The Cleveland Clinic—site of the world’s first total facial transplant—is among the largest medical providers in the world, with over 7.6 million patient visits in 2017 at hospitals in the U.S., Canada and the United Arab Emirates (a London location is planned for 2021). Its Heart and Heart Surgery program at the Miller Family Heart & Vascular Institute has been ranked the best in America every year since 1995, and it was the first major medical center to organize with patient-center institutes to combine clinical services around a single disease or organ system. It has also, for 10 years running, hosted the Patient Experience: Empathy & Innovation Summit, the world’s largest conference for the integration of the quality of patient experience with the digital medical sphere. ► MyClevelandClinic.org

The oldest hospital in Singapore, founded in 1821, has grown from a British imperial troop cantonment near the banks of the Singapore River into the island nation’s largest health system, serving more than 1 million patients annually. As a tertiary referral hospital with ancillary on-campus specialist centers, the SGH provides affordable care for patients, leads patient-driven clinical research and provides undergraduate to postgraduate educational training for both students and medical professionals. It was the first hospital in Asia to achieve the Magnet designation in 2010 for nursing excellence, awarded by the American Nurses Credentialing Center. ►  www.SGH.com.sg

The Baltimore-based institution—founded in the late 1800s by the banker, philanthropist and abolitionist it is named for—houses Johns Hopkins University’s School of Medicine, the second-highest-rated medical school in America (after Harvard Medical School), offering among the most advanced clinical research in the world. The hospital’s health system—including six academic and commercial hospitals, four health care and surgery centers and over 40 patient care locations—receives up to 3 million patients annually. A leader in neurosurgery and child psychiatry, the Hopkins Gender Identity Clinic was also the first in the United States to complete male-to-female reassignment surgery. ► HopkinsMedicine.org

This research-based university hospital in Berlin, associated with Humboldt University and Freie Universität Berlin, has 13,700 employees (including more than half of Germany’s Nobel laureates in physiology or medicine) working on over 1,000 projects devoted to patient-oriented research through interdisciplinary collaboration. As a hospital, Charité—which celebrated its tricentennial in 2010—is on the cutting-edge of biomedical innovation, with biotech startup labs, advisory roles and business initiatives focused on the convergence of technology and medicine. ► Charite.de

Located in Boston, MGH, which is the third-oldest hospital in the United States, is also the teaching hospital of Harvard Medical School, the pre-eminent medical school in the country, with virtually all of its physicians serving as Harvard Med faculty. With an annual research budget of more than $912 million, it also has the largest hospital-based research program; over 1,200 clinical trials are conducted at Mass General at any given time, and in 2016–17 MGH topped the Nature Index list, publishing more articles in “high-impact” journals than any other hospital in America. Current projects include combating the opioid epidemic and studying the impact of social and economic status on health. ► MassGeneral.org

TGH, one of nine sites that make up Canada’s University Health Network, is also the biggest and most well-funded research organization in the country and the largest transplant center in North America. As the teaching hospital for the University of Toronto, it leads transplantation research and innovation, accomplishing many “firsts,” including a triple organ transplant (double-lung, liver and pancreas) in 2015. TGH is home to the Peter Munk Cardiac Centre (named for the founder of Barrick Gold, who donated more than $175 million), a global leader in open-heart surgery and cardiovascular health. ► UHN.ca

Japan’s vital medical hub has advanced both medical research and practice, while educating the top doctors and researchers in the country. The hospital’s emphasis, in Japan and worldwide, is on the well-being of patients. In 2017, its specialized clinical departments completed 35 trials, in addition to treating more than 1 million patients. In 2012, the hospital opened the trailblazing Department of Disaster Medical Management. ► H.U-Tokyo.ac.jp

Located in Lausanne, Switzerland, beneath the snowcapped peaks surrounding Lake Geneva, the world-class CHUV serves as the teaching hospital for the country’s French-speaking citizens. It was one of only two hospitals in Switzerland’s “Health Valley” (home to nearly 1,000 biotechnolgy and medical technology companies) chosen by the World Health Organization to conduct the all-important Ebola vaccine trials in October 2014. CHUV is also committed to sharing cutting-edge medical practices through its free magazine, In Vivo, published in French and English. ► CHUV.ch

Sheba Medical Center—or Tel HaShomer Hospital—in Ramat Gan is a leader in medical science and biotechnical innovation, both in the Middle East and worldwide. The center’s collaborations with international parties have advanced innovative medical practices, hospital systems and biotechnology. The tertiary referral hospital, affiliated with Tel Aviv University, includes centers for nearly all medical divisions and specialties, and serves over 1 million patients per year. More than 25 percent of all Israeli medical clinical research takes place at its state-of-the-art facilities, and as a hospital it works with nearly every Israeli medical institute to educate students and advance the future of the medical profession. ► Eng.Sheba.co.il